The Things Conference is one of the most popular IoT developer events around. Our team had the opportunity to experience the event first-hand in 2020 as we traveled to Amsterdam and joined more than 1,500 professionals exploring devices, connectivity, and all things IoT.

And though the 2021 iteration took place entirely online, we had high-hopes that the conference team would put on another great show and were delighted to join this year as a sponsor and partner.

There was a lot of great content and conversation to digest over the five-day event, and too many bits of news and announcements to fit into a single post. Instead, I thought I would to share the top three things we learned at the conference as a first-time exhibitor.

Going into the event, we hoped to underscore to developers that, while LoRa and cellular are sometimes viewed as competing options, there are many cases where they are complementary and can be used together to power IoT solutions. This is especially true with LoRaWAN gateways, where LoRa is used on end nodes to forward packets to a gateway, and a cellular module on the gateway handles backhaul to a LoRaWAN network server like The Things Stack. This model is especially useful if the gateway needs to operate in a location where Wi-Fi and Ethernet are not reliable, you’re looking to build pre-provisioned gateways, or if you wish to isolate gateway traffic from an existing LAN. And it’s a model that’s even more approachable if you’re leveraging a no-fees cellular product like the Notecard.

Over the course of the event, we were pleased to hear that developers are open to adding cellular connectivity to their LoRaWAN implementations, and that a number of established vendors are adding cellular connectivity to new and existing Gateway products. We believe that a developer-friendly, no-fees model is key to making LoRa & cellular possible, and we shared our unique approach with developers in our virtual booth during the event.

2) Developers are looking for Cellular solutions that work

Before the event, we wondered what percentage of conference attendees would be actively evaluating cellular solutions, either as a component of LoRaWAN projects, or for their non LoRa solutions. We honestly didn’t know if developers at the world’s largest LoRa event would be thinking much about cellular.

And so, on the first day of the event, we put a single question poll up in our booth asking developers to tell us if they were evaluating cellular for a current or future project.

The result? Over 80% of developers who answered told us that cellular is on their radar, while 15% said they weren’t sure, and only 5% said they aren’t considering cellular at all. 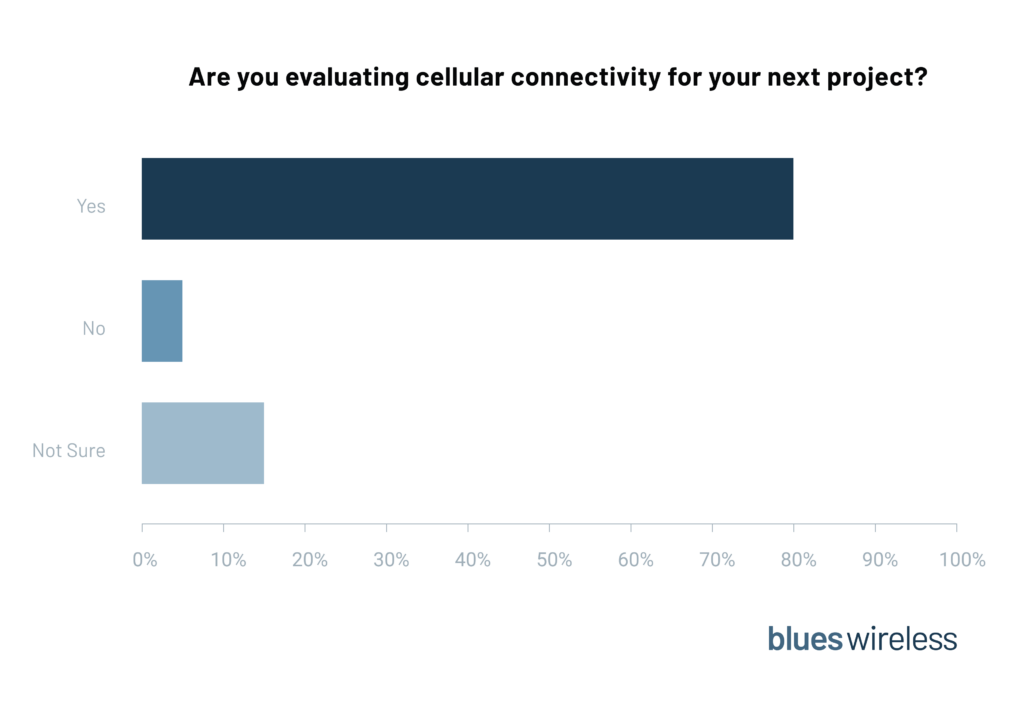 The follow-up conversations we had in the booth and in ad-hoc calls with developers reinforced these numbers, and added context. Many of these developers, it turns out, were looking at cellular because of its ubiquity and reach, but were turned off by the mobile phone-like fees and charges that still prevail in much of the space. For these developers, our vision for devices cloud-connected from birth and the simple, no fees cellular approach we’re taking with the Notecard and our Notehub.io cloud service struck a chord.

3) The future is bright for IoT developers everywhere

As with many other events of the last year, The Things Conference was forced to move into an online format for its 2021 iteration. And while I’m sure this move presented a number of logistical challenges to the team, they rallied around the format and pulled off an event that saw 62 partners, 123 speakers, and over 4,000 participants join the event. Across dozens of sessions, chat rooms and exhibitor booths, it was obvious that developers from around the globe are energized, determined, and more excited than ever to build products and solutions for the IoT.

We were honored to have been invited to participate in the Things Conference 2021, and want to thank the entire team for their hard work putting on such an important event, and for creating an engaging forum for IoT developers to gather. Here’s hoping that the 2022 iteration allows us to gather in person, once again!