When it comes to connectivity, we IoT developers are spoiled by a virtual cornucopia of networking options. Granted, “spoiled” is a positive spin on the situation, as others may also classify it as “overwhelming”. From modern cellular protocols like NB-IoT and LTE-M, to other LPWAN options like LoRa, to Wi-Fi and Ethernet and the venerable BLE, options are as plentiful as they are confusing.

What was once an obvious choice may now be more nuanced. For example, in an office setting, Wi-Fi is often the default choice due to its low cost and broad availability. But what happens when power is lost? If your IoT solution is key to a critical system like HVAC, fire suppression, or security, you may need a connectivity option separate from the building’s infrastructure. In addition, outdoor and mobile applications may obviate the ability to use more common connectivity methods like Wi-Fi or Ethernet.

Since every IoT application has its own unique requirements, let’s step through common connectivity options at a high level, outline pros and cons, and see which option (or combination thereof) is right for your project.

The Paradox of Choice

With this breadth of options we can find ourselves paralyzed by too many options with no clear path forward for our use case. Let’s shift our focus of analysis to specific deployment-related considerations and see how each connectivity option satisfies common requirements such as:

As we start to dive into various network connectivity options, we’ll soon see there is no silver bullet. However, if you want an overgeneralization of the network options we are about to cover, this table might help:

It’s worth reading on though, because the story doesn’t end here. There are nuanced differences to be aware of, and a combination of connectivity options may actually be the right choice for your project.

I’m going to go out on a limb and assume you don’t need a functional explanation of wired Ethernet. It’s the most mature, established, and commonly used LAN technology in existence. And while it’s not terribly common in IoT deployments, it’s a legitimate option.

The beloved backbone of our Internet is every IoT developer’s connectivity dream in terms of bandwidth, speed, and reliability. However, as seen in the image above, adding an RJ45 connector on an Ethernet module adds considerable physical bulk (and power consumption).

When is Ethernet a Good Choice?

Today’s Wi-Fi routers have come a long way in terms of speed, reliability, and (via new protocols) power consumption. Modern routers commonly support at least one of the latest wireless standards (802.11n, 802.11ac, or 802.11ax).

Wi-Fi for IoT has a flag-bearer in the 802.11ah standard with its low power consumption and ability for connected devices to share signals (making it a potential Bluetooth killer). However, we are still likely years away from mainstream routers supporting this standard.

When is Wi-Fi a Good Choice?

The two most popular cellular IoT technologies are LTE-M and NB-IoT. At a high level, LTE-M is the faster of the two and compatible with existing LTE infrastructure. NB-IoT has a wider theoretical range, but requires upgrades to the equipment at your nearest cell towers. And unlike LTE-M, it doesn’t support devices that are in motion (i.e. no tower “handoff”) and requires that devices are pre-configured with the proper frequency band.

LTE-M is one of the more advanced cellular connectivity options on LTE. It offers power-saving modes ideal for battery-powered IoT deployments. The data throughput is about 375KB down and 300KB up, making it adequate for relaying small amounts of data. Since it’s using LTE infrastructure, it also uses the same cell tower handover features, making mobility fully supported across multiple regions.

NB-IoT was designed specifically for IoT implementations. It provides long range access, consumes little power, and is known for its reliability and improved indoor penetration. NB-IoT operates on 4G networks (but not on the LTE bands) making it widely available in many countries. The downside? NB-IoT data throughput is less than LTE-M (60KB down and 30KB up).

It’s worth mentioning two other cellular standards as well, namely GSM and LTE Cat 1. GSM provides 2G/3G coverage for much of the world that has relatively low investment in cellular infrastructure. LTE Cat 1 is more ubiquitous than LTE-M, has a higher bandwidth ceiling (10 MB down, 5MB up), but has a significantly higher rates of power consumption.

When is Cellular a Good Choice?

LoRa stands for “Long Range Radio” and is an open standard networking layer gaining popularity in the EU. Supported by the LoRa Alliance, LoRa aims to solve the traditional IoT dilemma of balancing low power with long range communication requirements. (LoRa is the physical layer and LoRaWAN is the network layer.)

In ideal conditions, LoRa devices can communicate with LoRaWAN gateways 5km to 15km away. In practice, physical obstacles (trees, buildings, etc) can disrupt data transmission. LoRa requires an adequate network of physical gateways to be effective as well. Some cities, such as Amsterdam, are investing in LoRaWAN, making it an intriguing option in some urban settings.

While other LPWAN technologies like SigFox and Ingenu aren’t covered in this article, you may find them worth investigating.

When is LoRa a Good Choice?

Bluetooth Low Energy (BLE) is a wireless local networking technology allowing for device-to-device communication without a direct Internet gateway. BLE is not compatible with traditional Bluetooth, but does offer a similar range of communication (theoretically ~100m) while consuming far less power.

BLE is not a protocol one would use to connect a device directly to the cloud or a remote server. However, it’s a reasonable option in scenarios when device-to-device communication is a requirement.

When is BLE a Good Choice?

Maybe you’ve gotten this far and the analysis makes sense at a high level, but you’ve found an edge case wherein the network options provided don’t check all the boxes.

Nobody ever said these connectivity options have to work independently! In fact, maybe your best bet is to use two in tandem, or in a fallback scenario. This is where the global availability of cellular shows its true advantage.

Imagine a situation where Wi-Fi is available and reliable, but if the power goes out, you need to maintain a network connection on battery. Or your deployment scenarios include a mix of areas that support both LoRa and cellular, but neither is a guarantee.

These are some of the more common scenarios we are encountering: when IoT deployments need to maintain a network connection regardless of their physical location and power availability.

Why Notecard can Change the Story

If cellular is going to act as the primary mechanism for network connectivity or even as a “fallback”, we need a solution with an improved developer experience, lower cost, and turnkey deployment.

This is where the Notecard from Blues Wireless comes into play. The Notecard is a low power cellular and GPS device-to-cloud data pump that comes with 500 MB of data and 10 years of service for $49. No activation charges, no monthly fees. 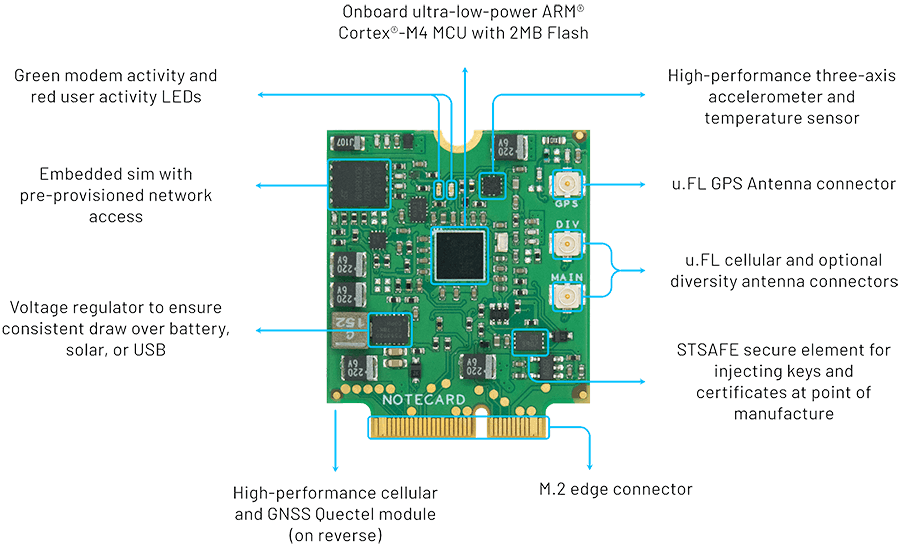 Not to mention, Notecard speaks the language of developers (JSON); gone are the days of archaic AT command syntax!

Since Notecards include an embedded SIM that arrives pre-provisioned, the end user (and developer) setup experience is seamless, turning that “Just Works” from 🔴 to 🟢:

Choosing between network connectivity options for your next IoT project depends largely on the requirements of your devices and what the end goal is. Ultimately, your decision comes down to the inevitable tradeoffs between power, bandwidth, and coverage.

In the right scenario, LoRa and LoRaWAN can be fantastic. Wi-Fi or Ethernet may be a no-brainer. Likewise, modern cellular solutions like Notecard have finally made global connectivity a reality for the IoT.

Learn more about how the Notecard from Blues Wireless is making cellular IoT a better choice for developers.